What Are Expansion Anchors? So - What Are Expansion Anchors?

Expansion anchors are a type of fastener, primarily used in concrete or masonry substrates that fasten objects down to the substrate by way of an expansion point gripping firmly against the substrate.

Expansion anchors aren't generally spoken about in this way but its important to understand the difference.

Essentially we have two different types that sort of produce the same outcome but the way of expansion is slightly different.

Lets take a look at both of these:

Ok so what are 'expanded expansion anchors'?

This is what an expanded expansion anchor sort of looks like: As you can see the very tip of the anchor is already expanded. So when we install this into a hole that is smaller than the expanded part of the anchor.

Because of the sprung steel the anchor is permanently pushing against the outer wall of the masonry hole and that's what gives it its grip!

Due to the action of the anchor no tightening is usually necessary and this speeds up install times considerably. These are mostly used in our experience in applications like laying plywood flooring down over concrete slabs etc.

As they aren't removeable its always best to double check before you install an expanded anchor!

These are by far the most common types of anchors and will include lots of styles you've seen before.

Again these types of anchors work by way of expansion, the action is just slightly different. You will usually install into a pre-drilled hole (usually the same size as the anchor) you will then usually tighten these anchors up and as you tighten them up an expansion point on the anchor will start to expand.

As this happens it is becoming tighter and tighter against the solid substrate.

Lets see a few types of expansion anchors that you're probably familiar with (we're not going to go over al of them as there is 100s!): 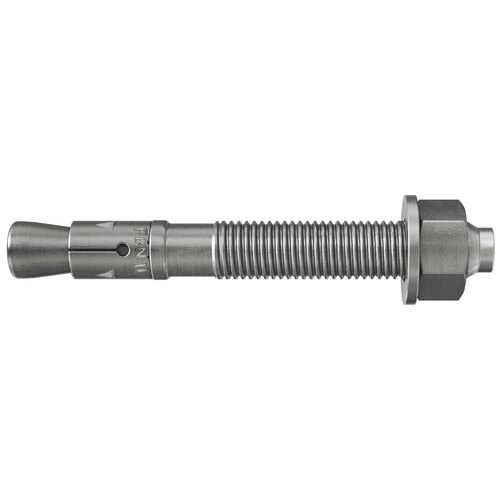 Through bolts work by way of expansion on the end fork. As you tighten up the nut on top the cone piece will slowly pull through the clasp and start to expand.

Through bolts are a very heavy duty fixing as they are usually manufactured from solid high tensile steel and the expansion claps will generally fully deform in the hole.

This leaves very little parts of the anchor that can possible fail.

Sleeve anchors are very similar to a through bolt in a sense of how the expansion is formed.

The main differences are though that that sleeve anchor is formed from a centre bolt and then a full length sleeve.

As the expansion cone pulls through the sleeve it expands the sleeve against the masonry.

They aren't quite as high load rated or well thought of as through bolts as they have a couple of downsides: They are a 1 piece body with a expansion cone, the beauty of drop in anchors is they do not come with bolts so you can use any length bolt you like.

The expansion action works in 2 ways and is the opposite of the other 2 listed above. The small expansion cone lies about half way down the anchor as standard.

Once you place the drop in anchor into the pre-drilled hole, you strike the expansion cone within the anchor with the tool above.

This forces the 4 prongs to expand and grip against the substrate. you can then install a bolt through the object you'd like to fasten and into the anchor There we have it

If the anchor expands in the hole, its an expansion anchor.

If you need more information on certain types of expansion anchors you can check out our full range of anchors and fasteners here: Fasteners