Merbau Deck Screws Are Back!!

How Are Screws Made How are Screws Made: A bit of History

The screw design has a (very) long history stretching back before 540 BC in ancient Egypt, and 600 BC in Babylonia where screw threaded rods were used as a screw pump to pull water up from rivers to irrigate farmland throughout the region. From there it was introduced to Greece by the philosopher Archimedes who first described it around 234 BC. Modern evidence gives us it's long term usage in Egypt and Babylon hundreds of years before. Eventually the screws early use was spread by its use in grape presses for wine making, and olive presses for the production of olive oil throughout ancient Greece. An Archimedes Screw used to move water up from a water source to an elevated location.

The modern screw as we know it appeared during the 1500's in Germany, each one hand made from a compressed head nail by a blacksmith. These were then handed to a cottage indusrty of families who's entire job was to cut a slot in the head, and create the thread. Due to their handmade nature no two screws were exactly the same, combined with the labour and expense to make each one, their uptake in an industrial use was limited for the next few hundred years. The metal screw we use today did not become a commonly used item until machines for mass production were developed toward the end of the 18th century.

Screw usage grew in 1770s United Kingdom due to the invention of screw-cutting lathes allowing for the mass production of wood screws (metal screws to be used in wood) along with the mass production of machine screws (metal screws to used in metal objects). These lathes pushed off a technological race, where continued development of new and different lathes over the next 50 years brought down the cost of making a screw. As the prices fell, their used increased, pushing greater improvement in their manufacturing. This cycle would go on for the next 200 years right up to the 1980's where the technology behind making screws reached the point where we are today

How Are Screws Made Today?

Screws are made from steel wire with a low to medium carbon mix. Other metals are used for specific uses, such as stainless steel, brass, nickel, or aluminum. The metal quality is of utmost importance in order to avoid the screw breaking during manufacturing.

There are four steps in manufacturing a screw: heading, thread rolling, heat treatment, and coating.

How are screws made: Heading

Wire is fed from a mechanical coil through a straightening machine. The straightened wire flows directly into a machine that automatically cuts the wire to length and die cuts the head of the screw into the shape required. Wire spooling into a straightening machine.

How are screws made: Cutting the Thread

Once cold headed, the screw are automatically fed to the thread-cutting machine. The screw is then cut using one of two different techniques.

In the reciprocating die, two flat dies are used to cut the screw thread. One die is stationary, while the other moves in a reciprocating manner, and the screw blank is rolled between the two.

The final method of thread rolling is the planetary rotary die process. It holds the screw blank stationary, while several die-cutting machines roll around the blank. How are screws made: Heat Treatment

Heat treating the screws increases it's overall durability. The screws are heated to a high temperature (about 900C/1652F), and then dipped into water. This sudden change in temperature hardens the bolt or screw material. How are screws made: Coating

The type of coating is determined by the screws use. The main concern for screws is their corrosion resistance, so a zinc-plated coating is a common choice. This is a process where the screw is submerged in a liquid containing zinc, and an electric current is applied so that the zinc bonds to the screw forming a coating over the surface. While zinc coated screws are fine for indoor use, for outside you'll need something stronger. That's where we have other options such as galvanised zinc flake coating or ceramic coating for superior corrosion resistance.

The chemical anti-corrosion spray and the baked ceramic top coating join together in a cross-linking effect. These layers are then bonded together with the metallic zinc layer through chemical reactions, resulting in a synergy of an almost unbeatable rust proof coating. 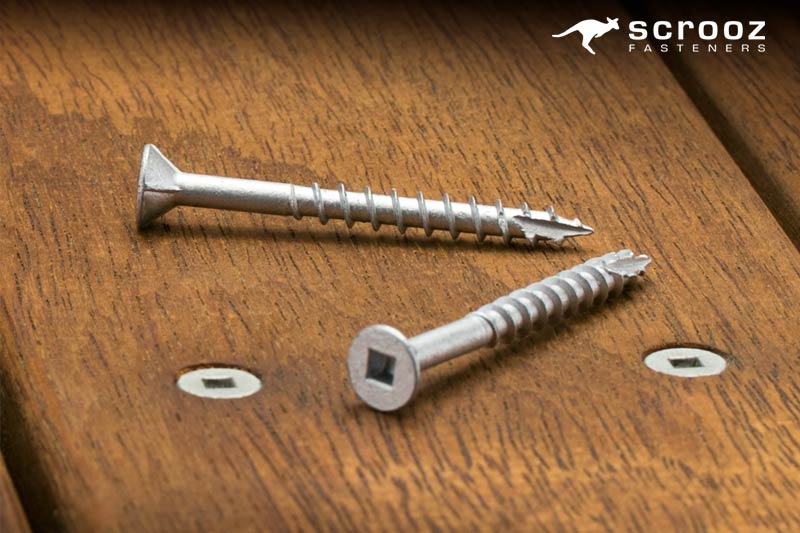 Ceramic coated screws are perfect for use in outdoor spaces such as decks.

From there, the screws are sorted by volume, boxed in their individual quantities, and sent across the world.

For more information you can find our range screws here: Screws